How can you tell if a school is good? First, look here… 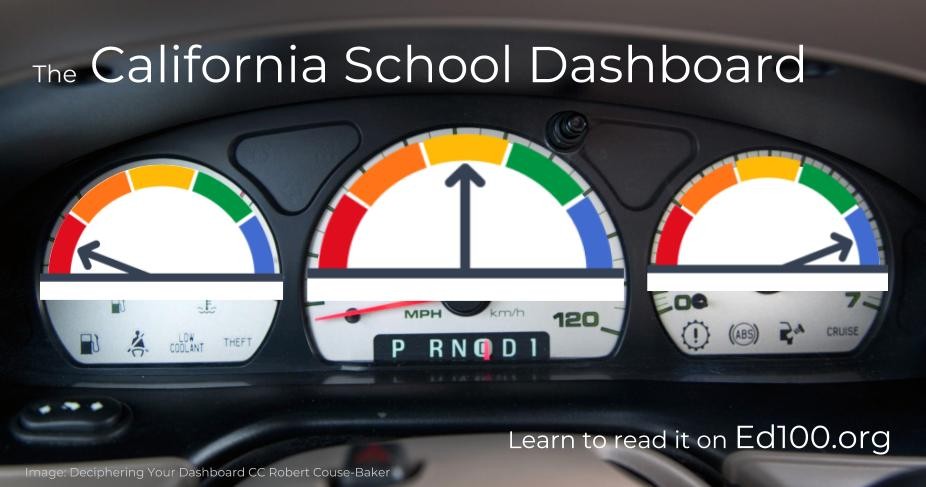 Is your school successful at educating the children it serves? It's a tough question for many reasons, beginning with a powerful cognitive bias: it goes against human nature to be objective about your own choices.

When did California launch the School Dashboard?

What is the California School Dashboard?

What does the Dashboard do?

Who is the Dashboard for?

What do the Dashboard colors mean?

What do the icons on the Dashboard mean?

Which is better, green or blue?

Why is the School Dashboard helpful?

How is the Dashboard different from a school's API score?

How is the Dashboard related to the LCAP?

What does Performance mean on the Dashboard?

What is a Subgroup on the Dashboard?

When you enroll your child at a school, you are making a choice — even if you lack realistic alternatives. As a parent, you want to believe that the school you have accepted for your child must be at least OK, right? It's natural to hope for the best.

Facts can't eradicate wishful thinking, but they can at least challenge it. In 2017, the California Department of Education took a big step to elevate the use of facts to evaluate schools by releasing the first version of the long-awaited California School Dashboard.

The Dashboard is NOT a single grade or rating. Instead, it is a collection of "indicators" — a bit like the dashboard of a car. On most car dashboards, a light turns on when there might be a problem. To find out more, you have to look into it. Sometimes you have to pop the hood and pull out the owner's manual because, well, cars are complicated. So are schools.

What does the Dashboard do?

The Dashboard summarizes how well your school is doing in multiple ways, which we explore in this series of posts. The Dashboard is useful for school district leaders, school board members, and PTA leaders because it can help you spot patterns. Within individual schools or across groups of schools, the Dashboard can help you see where the news is good or bad.

The indicators on the Dashboard summarize performance in five color-coded levels.

In Dashboard reports, icons accompany the colors, allowing them to be printed in black and white.

Not every indicator on the Dashboard uses all the colors, but red always indicates a problem. Blue is always best — even better than green.

Why the California School Dashboard Exists

From the outside, it's hard to know what's going on within districts and schools. But parents need trustworthy information about schools to make good choices for their kids. Voters want good information to know that schools are working. School leaders need information to help them improve. The indicators on the Dashboard are meant to direct attention where it might be needed, so that you will take a closer look and figure out what to do about it.

The Dashboard may seem complex, but it replaced a system that was too simple. Prior to the Dashboard, California ranked schools using a single score, the Academic Performance Index (API), which was based entirely on standardized tests. In practice, API scores were strongly correlated with wealth and proved of limited use as a diagnostic tool to help schools improve. After more than a decade of use, the API was discontinued in 2014 at the same time California dropped its old testing system and adopted the Common Core State Standards.

In contrast to the API's singular focus on test scores, the Dashboard sports multiple indicators related to the eight priorities that school districts must address in their Local Control Accountability Plan (LCAP). The Dashboard does not generate an overall score that can be used to compare or rank schools. The Ed100 blog includes more detail about the specific indicators on the Dashboard.

Several of the indicators on the Dashboard share an important similarity: they are meant to show "Performance" rather than just the most recent status of a measurement. What's the difference?

Performance is Status adjusted for Change

Digging deeper means looking beyond averages. The Dashboard can present a big-picture summary of performance in schools and districts, but it can also show filtered views that help you focus on student subgroups. This can help you see patterns. If you are trying to ensure that no students are being left behind, the Dashboard can help you advocate for changes to ensure that all kids get the attention and support they need.

For example, schools often look at test scores by grade level, gender, ethnicity, and parents' economic status. School districts also need to know if they are successfully educating students in foster care, or learning English, or with special education needs. The Dashboard can show these views.

Because the California School Dashboard is such an important resource in California's education system, we provide a lot more information about it in the Ed100 blog. Here are the major posts, organized as a series:

Extensively Updated May 29, 2017
to summarize the California School Dashboard and refer to the blog series.
Revised March 2018, April 2019.

The dashboard is getting a new look to make it easier for parents to understand. The pie icons will be gone. As soon as the final icons are selected we will let you know.
https://edsource.org/2018/new-friendlier-look-coming-for-californias-school-dashboard/601950