View Lessons ▾ Blog Search
1.0 Education is…
Overview of Chapter 1 1.1 California Context
Are California’s Schools Really Behind? 1.2 International Context
Are U.S. Schools Behind the World? 1.3 Economic Context
Schools for Knowledge Work 1.4 Social Context
The High Social Costs of Educational Failure 1.5 Wishfulness
Is my school better than others?
1.6 Progress
Are Schools Improving? 1.7 History
Have Schools Always Worked This Way? 1.8 Purpose
What is Education For, Really?
2.0 Students...
Overview of Chapter 2 2.1 Diversity
The Changing Face of America's Students 2.2 Poverty and Race
How Do Students' Backgrounds Affect Their School Performance? 2.3 Health and Learning
What Can Schools Do? 2.4 Parents
A Child's First Teacher 2.5 Levers for Change
Inputs and Outcomes
2.6 Motivation
What Motivates Students? 2.7 Special Needs
Why Not Teach All Kids Alike? 2.8 Foster Youth
Educating Foster Kids 2.9 Undocumented
Undocumented Students 2.10 Student Voice
What is the Role of the Student in Education Leadership?
3.0 Teachers
Overview of Chapter 3 3.1 Recruitment
Who Teaches, and Why? 3.2 Preparation and Certification
How To Make a Teacher 3.3 Retention
How to Retain a Teacher 3.4 Teacher Placement
Who Teaches Where? 3.5 Teacher Development
How Do Teachers Improve?
3.6 Collaboration
How Do Teachers Work Together? 3.7 Benefits
The Benefits of Teaching 3.8 Pay
How Has Teacher Pay Changed? 3.9 Evaluation
How Do Teachers Know If They Are Succeeding? 3.10 Tenure and Seniority
Teacher Tenure - Good? Evil? 3.11 Pensions
How Good is a Teacher's Pension?
4.0 Spending Time...
Overview of Chapter 4 4.1 Early Childhood
Yes, Preschool Matters 4.2 Class Size
How Big Should Classes Be? 4.3 School Hours
Is There Enough Time To Learn? 4.4 Time Management
Spending School Time Well 4.5 Extra Time and Tutoring
When Kids Need More Time and Attention
4.6 Summer
Time to Learn, or Time to Forget? 4.7 After School
What Should Happen After School? 4.8 Absences
Don't Miss Class!
5.0 Places For Learning
Overview of Chapter 5 5.1 Where Do You Live?
Zip Codes and School Quality 5.2 School Choice
Should You Have a Choice of Schools? 5.3 Selectivity and Diversity
How Schools Sort Students 5.4 At Risk
When Regular School Doesn't Cut It 5.5 Charter Schools
Public schools, different rules
5.6 Private Schools
Tuition, Vouchers and Religion 5.7 Community Schools
Could Schools Do More Than Educate? 5.8 Principals
The Pivotal Role of Educational Leadership 5.9 School Facilities
What Should a School Look Like? 5.10 School Climate
What Makes a School Good? 5.11 Small Schools
Oops, We Shrunk the Schools!
5.12 Home Schools
How Do They Work? 5.13 Discipline and Safety
Who Rules the School?
6.0 The Right Stuff
Overview of Chapter 6 6.1 Great Expectations
How Do Common Core Standards Work? 6.2 Academic Rigor
Is School Challenging Enough? 6.3 Literacy
Ensuring All Kids Learn to Read, Write and Speak English 6.4 STEM
Science, Technology, Engineering and Math 6.5 Test Question #1
What's at Stake?
6.6 Technology in Education
New Tools for Teaching and Learning 6.7 Let’s Get Engaged
Making School Interesting 6.8 The Arts
Creating in School 6.9 P.E. and Athletics
Are They Really Necessary? 6.10 Let’s Go!
What Makes a Field Trip Great? 6.11 Career Technical Education
New Thinking
6.12 Service Learning
How Can I Help? 6.13 Social-Emotional Learning
Intangibles that Support Academics 6.14 Character
Can Values and Habits be Taught? 6.15 Geography, History and Civics
When, Where and Why 6.16 Language Learning
How Not to Raise Ugly Americans 6.17 Personal Finance
Learning to Earn
7.0 And a System…
Overview of Chapter 7 7.1 The State
The Buck Stops Here 7.2 The Feds
Power to Provoke Change in Education 7.3 School Districts
In Charge of Most Local Schools 7.4 Thinking Regionally about Education
County Offices, and Crossing Boundaries 7.5 Teachers' Unions
Don't Underestimate Them
7.6 Initiatives and Education
Power to the People? 7.7 Education Power Players
Politics and Philanthropy 7.8 Accountability
Principles and Policies for Education 7.9 Consequences
Intervening When Schools Fail 7.10 The LCAP
Annual plans for school districts
8.0 …with Resources…
Overview of Chapter 8 8.1 Spending
Does California Spend Enough on Education? 8.2 Education Dollars
What They Buy 8.3 Who Pays
Where California's Public School Funds Come From 8.4 Prop 13 and Prop 98
Then and Now 8.5 Local Control Funding Formula
LCFF Dictates How State Funds Flow to School Districts
8.6 Allocations
Categorical funds and other exceptions 8.7 Allocations
Districts Control How Money Gets to the Classroom 8.8 Effectiveness
Is Education Money Well Spent? 8.9 More Money for Education
What Are the Options? 8.10 Parcel Taxes
Only in California... 8.11 Volunteers
Stealth Wealth for Schools
9.0 Success
Overview of Chapter 9 9.1 Measures of Success
For Kids and For Schools 9.2 Student Success
How Well is My Kid Doing? 9.3 Tests
Standardized Measures of Student Learning 9.4 Student Readiness
College and Career 9.5 Education Data
Keeping Track of the System
9.6 Achievement Gaps
The System's Biggest Challenge 9.7 The Dashboard
Measuring California School Performance 9.8 After High School
What California’s System Provides 9.9 Paying for College
High hopes and debt
10.0 So Now What?
Overview of Chapter 10 10.1 Blow It Up?
Big Ideas For Education Change 10.2 Go Big
What Money Might Do 10.3 Educational Efficiency
Education for Less 10.4 Change
What Causes Change in Education? 10.5 Learn More
Organizations and Resources 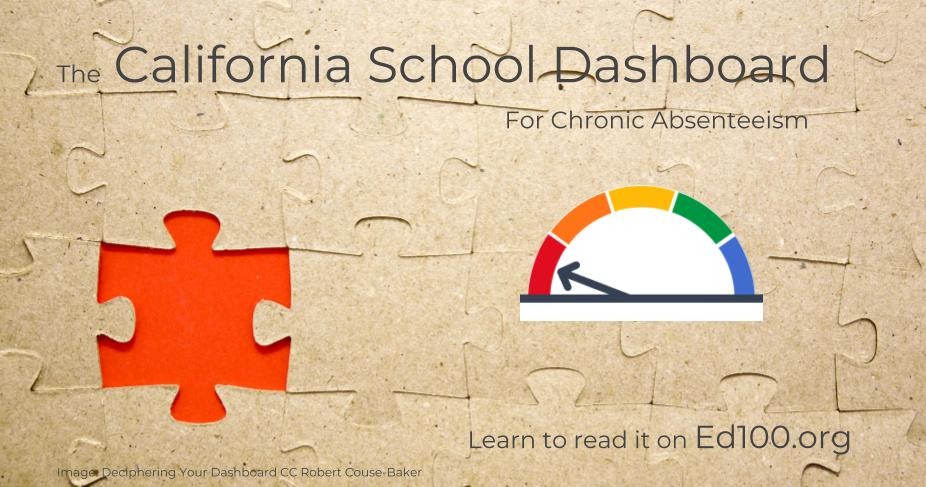 Showing up to school is the daily starting line for education. When kids miss school it's a warning sign of bad outcomes down the road. Because attendance matters so much, the school finance system is designed with powerful incentives to encourage it. School districts receive funds only for the students who show up. When kids miss out on school, school districts miss out on funding. Attendance records are audited.

When a student misses school more than 10% of the time, he or she is said to be chronically absent. The California School Dashboard includes an indicator that focuses on chronic absences among the 4.3 million students in grades K through 8. In 2017-18, about 9% of them were chronically absent, slightly worse than the prior year: 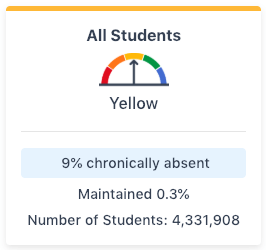 An ordinary school year in California is 180 days, so the typical threshold for chronic absenteeism is 18 days. In the 2017-18 school year nearly 400,000 students in California were chronically absent, each missing more than two and a half weeks of school. 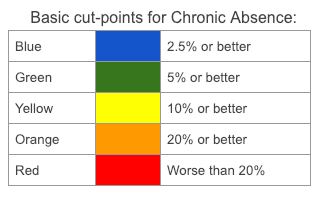 On the other hand, if the average chronic absentee rate at your school has changed by more than half a percentage point in the last year, the performance color might be bumped up or down a level or more. Remember, the Dashboard is based both on status and change. Here's the five-by-five reference table:

Significant change in the rate of chronic absence can significantly influence the performance color on the dashboard. For example, look at the bottom-right corner of the five-by-five table above. A chronic absenteeism rate of more than 20% is a real cause for concern, but if the rate is improving faster than 3% year-on-year, it might make better sense to celebrate and support progress than to take alarm. Instead of red, the performance color in this case is yellow.

When the Dashboard is being applied to a small school (or a small subgroup) of fewer than 150 students, the outer columns are combined with the inner ones. In this "three-by-five methodology" the dashboard shows whether chronic absenteeism got worse, stayed the same, or got better. By eliminating the nuance of by how much, this methodology avoids chopping up the data into groups too small to be displayed.

As always, the Dashboard's essential purpose is to help focus attention where it is needed. The point isn't just to look at it, but to use it as a starting place for improvement. Using the Dashboard can help you figure out which schools in your district are struggling with chronic absenteeism. Examine which student subgroups have low attendance and find out why. Going to the data can help reduce biases and make a difference.

Across the state, in 2017-18 chronically absent students missed more than seven million days of school, and their districts missed out on more than half a billion dollars in funding. Investments to improve attendance not only help students learn, they can pay for themselves because school districts receive more funds when students show up.