How much does it cost to provide a K-12 education? 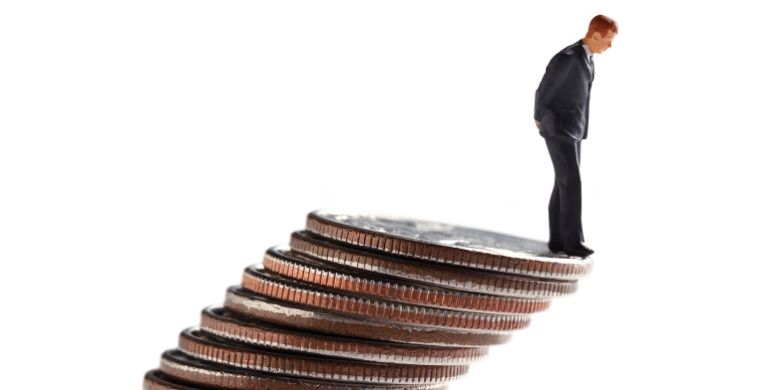 Do you know? Can you guess?

I will answer the question in a moment. But first, I want to help you feel as uncomfortable as possible about the fact that you don't know. Because I bet you don't, and I think you should. After all, you are a voter and a taxpayer, and also the kind of person who cares about education, right? You may even think (as I do) that we should be willing to spend more, particularly in California.

Let's imagine a fictitious, average California public student. (For fun, and with apologies, let's call this student Alex, a name that is almost perfectly androgynous according to the Social Security Administration.) To remind ourselves that averages lie, let's remember that Average Alex is about half Latino, 50% poor, and of course about half male. Alex is also obese, but only on Tuesdays. Again: averages lie.

So how should we quantify the total investment in the education of Average Alex?

It's a trickier question than it might seem. Money for education comes from local, county, state and federal sources. The accounting to combine them is neither straightforward nor, apparently, the priority of anyone with a sense of urgency. The US Department of Education collects and publishes the data at the state level through the National Center for Education Statistics (NCES), but at a delay of about three years.

Based on the NCES figures, the total 13-year public investment in the education of California's Average Alex, adjusted for inflation, comes to about $122,000. [note: in 2012]

Most people raise their eyebrows at this number. It's enough to buy a small foreclosed-on house in Sacramento. It's more than double the annual income of the median household in America, which is about $50,000 per year. (My kids remember this chestnut as "50/50 over 50.") It's less than two years of salary for an average California teacher.

Money is only valuable for what it can buy, right?

How should we think about this number, now that we have it? Is it consistent with other states? Louisiana and Georgia spend about the same per student as California does. New York spends much more (over $210,000), but Mississippi spends less ($100,000). 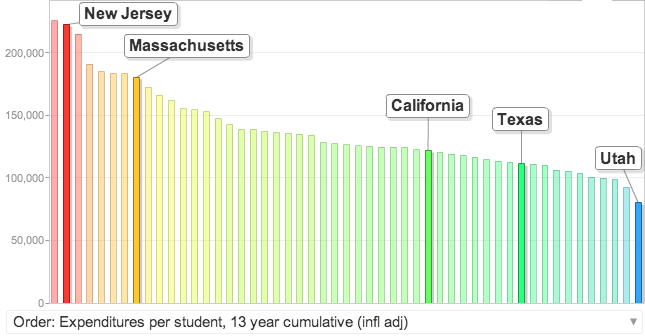 California education spending per student is somewhat lower than middle-of-the pack, and has been so for a long time.

Of course, these are very different places.  Money is only valuable for what it can buy, right? Does the educational power of a dollar go farther in some states than others?

Of course it does. In fact, NCES publishes a data series that tries to provide a basis for evaluating the purchasing power of education budgets in different states. The Annie E. Casey foundation favors restating education expenditures to adjust for differences in local purchasing power. For example, California is an expensive place to hire college graduates - such as, well, teachers. Restating the figures makes it easier to rank state education expenditures meaningfully, and helps explains why California so consistently ranks toward the bottom. California is an expensive labor market, but it funds education as if it were an average labor market. That's why in the annual EdWeek ranking of state spending on education California shows up near the bottom of the list.

The sheer size of these numbers makes them hard to use. What does it mean to invest an average of $122,000 per student in K-12 education? How much is it, really? Compared to the average lifetime economic contribution of a participating, tax-paying adult (about $4 million) it is a small figure. How can this knowledge help us think differently?

The cost of a student's time.

To think about the value of $122,000 over 13 years, it is useful to break the number up. Average Alex spends close to six hours a day in class for up to 180 days per year - a total of slightly over 1,000 hours of class time. What is the investment per student per instructional hour?

It turns out that the average expenditure per student hour in California is just a bit over the minimum wage: about $8/hour. This way of thinking about our investment in education is provocative, and has some advantages. Time in school is a precious commodity, but we rarely put a value on it. Having a dollars-per-hour approximation of the cost of kids' time allows us to re-imagine students as workers, and teachers as managers. The $8 per hour rule of thumb can also help to spur discussion about the real cost of activities that use time - some discussion prompts are suggested below.

Imagining a par value per hour of a student's time also can help to quantify the value of time beyond the classroom. A major difference between students that come from families of wealth and families in poverty is how they spend time outside of school. What is the value of time students spend on homework or engaged in out-of-school learning? As a rough guess, one could do worse than assume minimum wage.

For additional thoughts about the use of time in education, see the "Time" chapter in Ed100.org. The chart featured on this post is adapted from the EdSource "States in Motion" series of interactive data visualizations. This is an updated and extended version of a post that first appeared on EdSource.