What is the Equality Act? 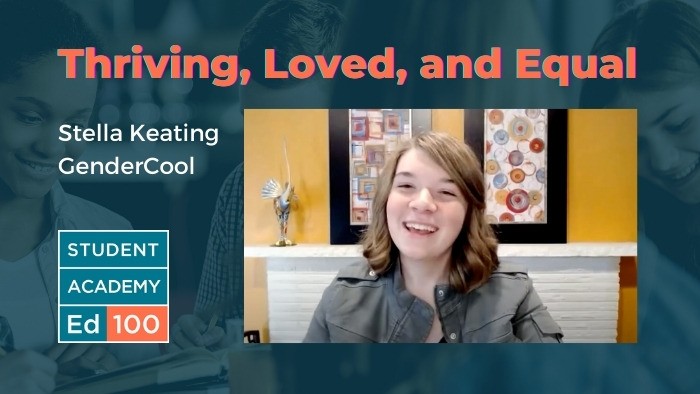 Civil rights on hold in the US Senate

Stella Keating, a student spokesperson for the GenderCool Project, earned a degree of fame in 2021 for her testimony before a committee of the US House of Representatives. California laws broadly prohibit discrimination on the basis of gender, but some forms of discrimination remain legal in many US states. Partly as a result of Stella’s testimony, in February 2021 the US House of Representatives voted 224 to 206 to pass the Equality Act, a bill that would prohibit discrimination on the basis of sex, gender identity, and sexual orientation in all US states and territories. The job is not done — the bill is stuck in the Senate.

Stella also spoke to members of the Ed100 Academy for Student Leaders — watch and you’ll see why her testimony was so important.

Putting a friendly face to a big change

Stella and her fellow GenderCool “champions” are playing an essential role by bringing human faces and young voices to conversations about equality under the law for people of all sexual orientations and gender identities. Public attitudes are shifting, quickly but unevenly. According to polls by Gallup, in 2020, 5.6% of all adults self-identified as LGBT, an increase of a full percentage point versus the poll three years prior. This figure can be expected to rise dramatically in coming years, because it varies significantly by generation.

Based on the survey results, Gallup took a shot at characterizing the overall prevalence of LGBT people in America: “Rebasing these percentages to represent their share of the U.S. adult population finds 3.1% of Americans identifying as bisexual, 1.4% as gay, 0.7% as lesbian and 0.6% as transgender.”

This estimate of the national average needs to be considered in context — it conceals major variations by generation in a way that massively understate the scale of interest in equality on this issue:

Social science research on this topic is complex. In general, adults in older generations are less likely to express an LGBT identity on surveys than those in younger generations. Responses may reflect an individual’s personal identity, but may also reflect an individual’s public identity. Direct survey research about LGBTQ+ youth is fairly scarce, for reasons of practicality, privacy and safety, as explained by The Trevor Project.

The 2020 Gallup survey underscored the complex connections between many aspects of identity, including generational identity, religious identity, gender identity, and sexual identity. Political identity plays a role, too — compared to Republicans, Democrats were more than five times more likely to identify as LGBT in their response to the survey.

The average US Senator is over 64 years old. Given the large generational divide on this issue, youth voices like Stella’s are especially crucial in policy discussions related to gender equality under the law. In the US Senate, work to pass the Equality Act is being led by Oregon Senator Jeff Merkley.