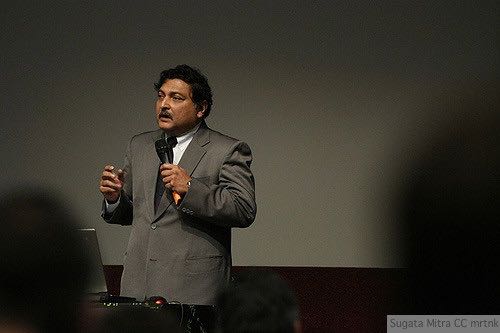 What would happen if you cemented an internet-connected computer into a wall in an impoverished area of an Indian city? Enterprising education researcher Sugata Mitra decided to find out. He watched with amazement as kids with little or no education clustered around the wall and found ways to do things that interested them.

In the decade since, Mitra has gradually refined his experiment, as he describes in a fascinating TED talk. His research focus is on what children will choose to do and learn if they are given access to the internet and very light direction about what to do with it. His central conclusion is that students will self-organize into groups and figure out how to do amazing things. (In one of his experiments, groups of Italian children without any help from a teacher are challenged with the question, posed in English, "Who was Pythagoras, and what did he figure out?" Watch the TED talk to find out what happens.)

Mitra's work is provocative. His emphasis on broad questions and self-organized groups seems deeply at odds with state standards and individual assessments. He is researching learning models in which there is no teacher, not out of disregard for teachers but because he wants to understand what is possible in communities that cannot afford them. Learning in such a setting depends deeply on self-motivation, which means that children who are not self-motivated will not join or keep up with a successful group of learners. They will be "left behind."

Despite these and other differences, Mitra's work feels important for American education in a world that is growing ever more "flat." School leaders in America have begun to notice the success of online learning resources like the Khan Academy.

These sites were originally designed to support independent, individually-paced learning. They are often used in a stand-apart, "supplementary" manner. However, schools are beginning to embrace "blended learning" strategies, committing class time to the use of structured tools like Khan Academy. New patterns appear to be emerging. In practice, it appears that many schools using Khan Academy may be gravitating to a model in which students work together in small groups, Mitra-style, to understand and master material.

To place this article in context, see the following lessons on Ed100.org:

Thanks to Full Circle Fund alum Katherine Casey for bringing this extraordinary TED talk to my attention.

I recently gave an assignment to students that was new so I had nothing to show them as an example. I provided bare bone instructions and just told them to make it happen. I am just now seeing the results and am seeing how powerful they can be when given the ability to "figure things out on their own. Oh, it was to select a recipe then create a cooking video showing how to make it but must include all three people in the group. Now we are on to Blogging like the movie Julie and Julia - cannot wait to see how that turns out!