View Lessons ▾ Blog Search
1.0 Education is…
Overview of Chapter 1 1.1 California Context
Are California’s Schools Really Behind? 1.2 International Context
Are U.S. Schools Behind the World? 1.3 Economic Context
Schools for Knowledge Work 1.4 Social Context
The High Social Costs of Educational Failure 1.5 Wishfulness
Is my school better than others?
1.6 Progress
Are Schools Improving? 1.7 History of Education
How have Schools Changed Over Time? 1.8 Purpose
What is Education For, Really?
2.0 Students...
Overview of Chapter 2 2.1 Diversity
The Changing Face of America's Students 2.2 Poverty and Race
How Do Students' Backgrounds Affect Their School Performance? 2.3 Health and Learning
What Can Schools Do? 2.4 Parents
A Child's First Teacher 2.5 How Does Education Change
Inputs and Outcomes
2.6 Motivation
What Motivates Students? 2.7 Special Needs
Why Not Teach All Kids Alike? 2.8 Foster Youth
Educating Foster Kids 2.9 Undocumented
Undocumented Students 2.10 Student Voice
What is the Role of the Student in Education Leadership?
3.0 Teachers
Overview of Chapter 3 3.1 Recruitment
Who Teaches, and Why? 3.2 Preparation and Certification
How To Make a Teacher 3.3 Retention
How to Retain a Teacher 3.4 Teacher Placement
Who Teaches Where? 3.5 Teacher Development
How Do Teachers Improve?
3.6 Teacher Collaboration
How do educators work together? 3.7 Benefits
The Benefits of Teaching 3.8 Teacher Pay
How Much do Teachers get Paid? 3.9 Evaluation
How Do Teachers Know If They Are Succeeding? 3.10 Tenure and Seniority
Teacher Tenure - Good? Evil? 3.11 Pensions
How Good is a Teacher's Pension?
4.0 Spending Time...
Overview of Chapter 4 4.1 Preschool
Yes, Early Childhood Education Matters 4.2 Class Size
How Big Should Classes Be? 4.3 School Hours
Is There Enough Time To Learn? 4.4 Time Management
Spending School Time Well 4.5 Extra Time and Tutoring
When Kids Need More Time and Attention
4.6 Summer
Time to Learn, or Time to Forget? 4.7 After School
What Should Happen After School? 4.8 Attendance
Don't Miss School!
5.0 Places For Learning
Overview of Chapter 5 5.1 Where Do You Live?
Zip Codes and School Quality 5.2 School Choice
Should You Have a Choice of Schools? 5.3 Selectivity and Diversity
How Schools Sort Students 5.4 At Risk
When Regular School Doesn't Cut It 5.5 Charter Schools
Public schools, different rules
5.6 Private Schools
Tuition, Vouchers, and Religion 5.7 Community Schools
Services beyond classwork 5.8 Principals and Superintendents
The Pivotal Role of an Educational Leader 5.9 School Facilities
What Should a School Look Like? 5.10 School Climate
What Makes a School Good? 5.11 Small Schools
Oops, We Shrunk the Schools!
5.12 Home Schools
How Do They Work? 5.13 Discipline and Safety
Who Rules the School?
6.0 The Right Stuff
Overview of Chapter 6 6.1 Grade-level Expectations
How Do Common Core Standards Work? 6.2 Academic Rigor
Is School Challenging Enough? 6.3 Literacy
Ensuring All Kids Learn to Read, Write and Speak English 6.4 STEM
Science, Technology, Engineering and Math 6.5 Tests
Why Tests Matter and How They Work
6.6 Technology in Education
Tools for teaching and learning 6.7 Student Engagement
Making School Interesting 6.8 Arts Education
Creating in School 6.9 P.E. and Athletics
How does sweat and movement help learning? 6.10 Let’s Go!
What Makes a Field Trip Great? 6.11 Career Technical Education
Education for career opportunities
6.12 Service Learning
Learning to Help Others 6.13 Social-Emotional Learning
Education for Mental Health 6.14 Character
Can Values and Habits be Taught? 6.15 Geography, History and Civics
When, Where and Why 6.16 World Language Learning
The Cure for Ugly Americans 6.17 Personal Finance
Learning to Earn
7.0 And a System…
Overview of Chapter 7 7.1 The State
The Buck Stops Here 7.2 The Feds
Power to Provoke Change in Education 7.3 School Districts
In Charge of Most Local Schools 7.4 Thinking Regionally about Education
County Offices, and Crossing Boundaries 7.5 Teachers' Unions
Don't Underestimate Them
7.6 Initiatives and Education
California's Initiative Process and How It Affects Schools 7.7 Politics and Philanthropy
Power players of the Education System 7.8 Accountability
Principles and Policies for Education 7.9 When Schools Fail
Interventions and Consequences 7.10 The LCAP
Annual plans for school districts
8.0 …with Resources…
Overview of Chapter 8 8.1 Spending
Does California Spend Enough on Education? 8.2 Education Spending
What can education dollars buy? 8.3 Who Pays for Schools?
Where California's Public School Funds Come From 8.4 Prop 13 and Prop 98
Initiatives that shaped California's education system 8.5 LCFF
The formula that controls most school funding
8.6 Categorical funds
Special education and other exceptions 8.7 School Funding
How Money Reaches the Classroom 8.8 Effectiveness
Is Education Money Well Spent? 8.9 More Money for Education
What Are the Options? 8.10 Parcel Taxes
Only in California... 8.11 Volunteers
Hidden Treasure Trove for Schools
9.0 Success
Overview of Chapter 9 9.1 Measures of Success
For Kids and For Schools 9.2 Student Success
How Well is My Kid Doing? 9.3 Tests
Standardized Measures of Student Learning 9.4 Student Readiness
College and Career 9.5 Education Data
Keeping Track of the School System
9.6 Achievement Gaps
The System's Biggest Challenge 9.7 The Dashboard
Measuring California School Performance 9.8 After High School
What California’s System Provides 9.9 Paying for College
High hopes and college loans
10.0 So Now What?
Overview of Chapter 10 10.1 Blow It Up?
Big Ideas For Education Change 10.2 Go Big
What Money Might Do 10.3 Educational Efficiency
Education for Less 10.4 Change
What Causes Change in Education? 10.5 Learn More
Organizations and Resources 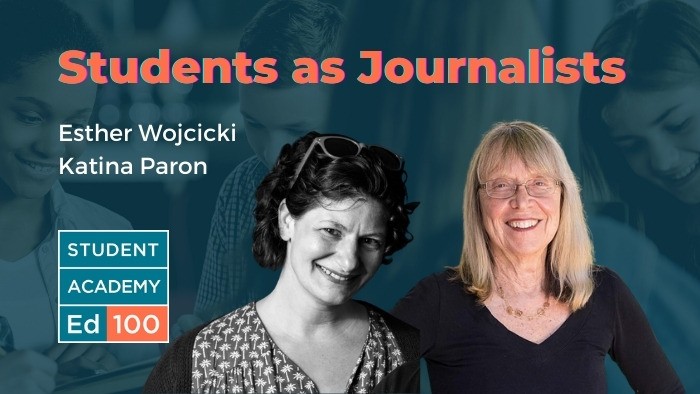 No school paper? Start one!

One of the great privileges of orchestrating the Ed100 Academy for Student Leaders has been the occasional opportunity to connect people with a shared passion. Last summer, we brought together Katina Paron and Esther Wojcicki to talk about student journalism as a pathway to leadership opportunities for students.

Wojcicki, a leading American educator and journalist, is famous for three things: teaching a high school journalism class that has changed the lives of thousands of kids, inspiring Silicon Valley legends like Steve Jobs, and raising three daughters who have each become famously successful. Often called the Godmother of Silicon Valley, she speaks and writes passionately about the “TRICK” to raising successful people, including “the power of giving kids control.” 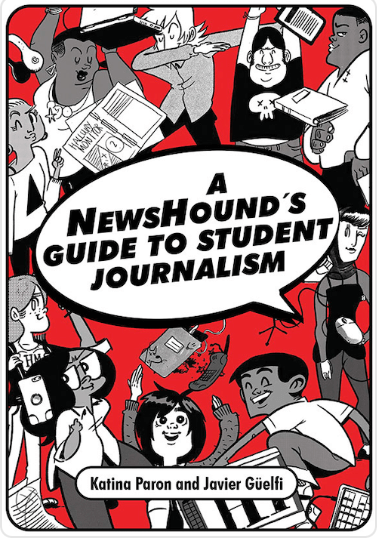 Katina Paron, a Brooklyn-based journalism educator, has been creating byline opportunities for teens for more than 25 years. Among other work, she is the author of A NewsHound's Guide to Student Journalism, a comic book-style resource that can help a new high school news team form and function.

Every community needs a school paper

Both Wojcicki and Paron argue that every high school can benefit from a student newspaper.
“A school paper builds community,” says Paron. “It’s a form of participatory civics for young people who can’t vote. It’s an action-focused skill that not only betters your community but makes you a part of it.”

The potential power of student journalism is particularly great in California because the California Student Free Expression Law, passed into law in 1977 as Ed Code 48907, “affirms the right of high school newspapers to publish whatever they choose, so long as the content isn't explicitly obscene, libelous, or slanderous, and doesn’t incite students to violate any laws or school regulations.”

Both speakers repeatedly emphasized that the door is wide open for students to start a publication. “You are the right person to start a journalism program at your school,” said Paron. The key to getting started is to collect a few friends and a faculty advisor, which can be an educator in any subject.

Wojcicki underscored the value of recruiting friends to get started. “It’s like how to have a good time with your friends, supported by the school,” she said. Creating and running a paper isn’t just about writing, and there are all kinds of ways for students to get involved if they want to.

The whole process is easier with good tools and examples. Wojcicki and Paron collaborated to develop a handout for students at the conference with links to some of their favorite resources. Excerpts in the table below:

Wojcicki highlighted the opportunity for students to develop content for younger students on Tract.app, a platform that she has helped develop. Students who contribute content on Tract can earn a small stipend. Two students who have been “Tract creators” presented their experience in a separate session of the conference. Watch them here.

The 2022 Ed100 Academy for Student Leaders will be held online June 20-22. Learn more about it, including how to attend. It’s free for students and faculty advisors.