Funding Education: Are We Looking at the Right Numbers? 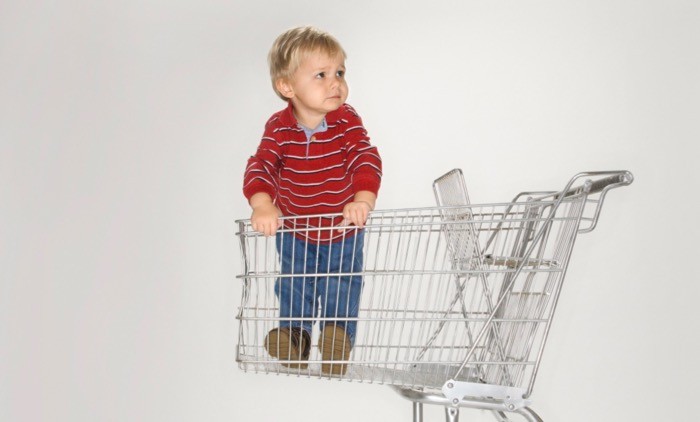 Most of the time, when we look to see how well we are supporting education the focus falls on a very narrow set of numbers.

How well do we support children and families?

These are important. By almost any standard, California’s investment per student and per school significantly lags the national average.

But these numbers aren't the whole story. Another set of investments have a huge impact on education, and they aren't part of the state’s education budget. If we are really serious about making sure all children have the support they need to be successful in school, we need to keep a close eye on a different part of the state budget.

Rather than asking, “how well do we fund our schools?” it’s time to ask a different and broader question:

“How well do we support children and families?”

We know for sure there is a strong correlation between poverty and academic success. Yes, money matters. Parents who don’t have secure and stable housing, or who juggle two jobs, are less likely to have the time to be involved in their children’s education.

It’s not just the money we invest in a classroom that makes a difference.

A 2019 report from the Public Policy Institute of California (PPIC) reveals that the child poverty rate in California still exceeds the rate before the Great Recession. Close to half of California’s children live in or near poverty. About 60 percent of students attending California public schools are eligible for free or reduced priced meals. 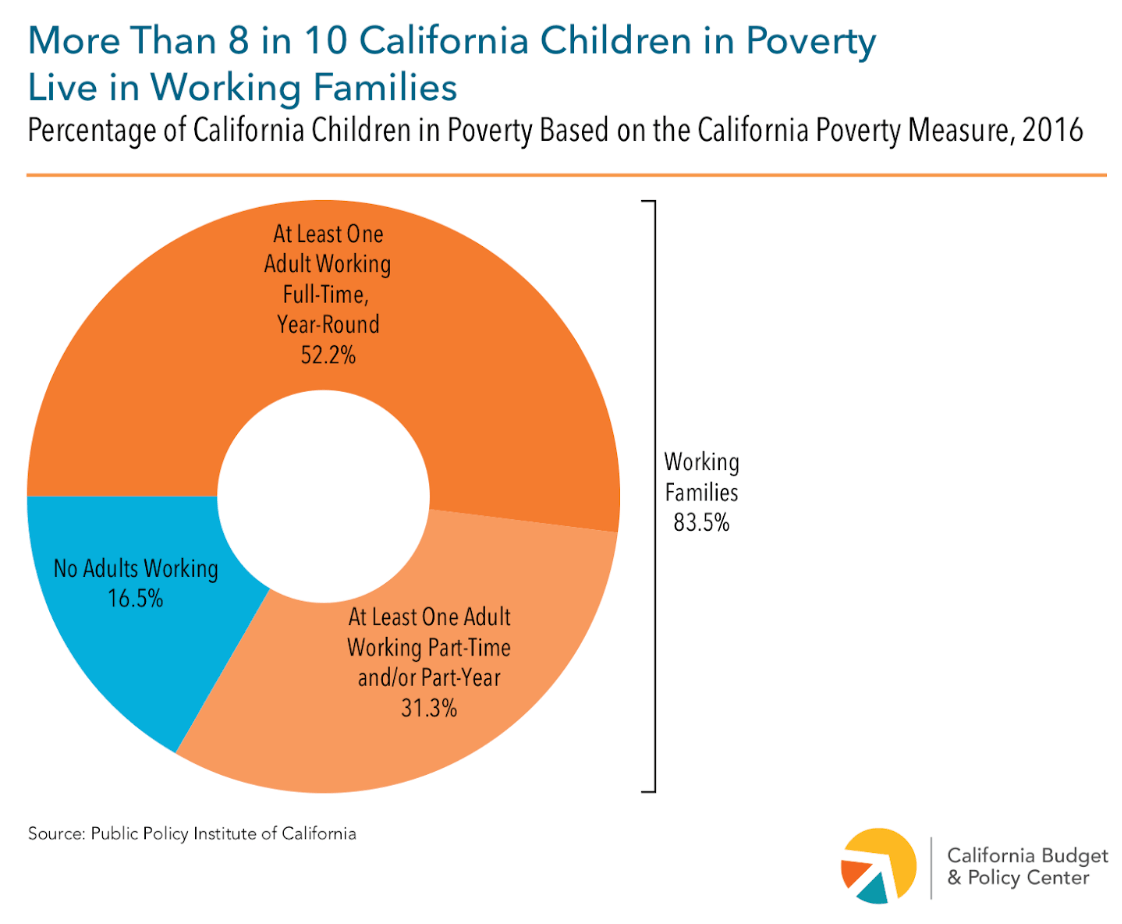 These challenges affect our children’s education. Solving them will require investments far beyond what California puts in the education budget.

More $$ for the working poor

California’s budget this year makes important new investments in this direction. Let’s start with what many education junkies may not have on the top of their list: The Earned Income Tax Credit (EITC). This is a nerdy bit of tax policy that reduces the taxes of the working poor. For very low income families, it provides a cash refund.

The 2019 California budget more than doubles this tax credit. It includes help for low-income families by providing an additional $1,000 annually to address the costs of raising young children. This expansion will provide financial support to one million more economically distressed households to help with the costs of food, rent, and child care, bringing the total number of eligible households to three million.

Several studies find that the federal EITC may improve school achievement and increase educational attainment for children. For example, children in families who received larger EITCs:

– Scored better on reading and math tests, with higher scores for younger children, according to several studies, including this one and this one.

– Were more likely to complete high school, attend college, be employed as a young adult, and earn more, according to other studies, such as this one and this one.

Children whose families received larger credits from the federal EITC during the spring of their senior year in high school were more likely to enroll in college, according to new research.”

Many investments outside the traditional “education budget” are important for children and families. Here is a quick look — with links — at those investments in the 2019-2020 California budget.

The tide seems to have turned when it comes to support for investment in early childhood. Policy makers increasingly seem to recognize the link between investments in early childhood and education success. California now targets money to expand pre-school, full-day kindergarten, and access to childcare as well as programs to reduce child poverty. The California budget expands paid family leave for each parent from six to eight weeks. This expansion adds an additional month of paid leave for two-parent families, allowing up to a combined four months of leave after the birth or adoption of a child.

There also is a new investment in Child Savings Accounts. These accounts can be used for tuition, room and board, books, supplies and equipment, and mandatory fees associated with post-secondary education such as college, vocational, or technical schools. The accounts are generally opened with an initial contribution, or with seed money from a sponsoring organization.

Children and families benefit from services to support health care and child welfare. This includes CalWORKS, which assists needy families with children at home, and CalFRESH, which provides food to low income families and individuals. The 2019 budget provides increased assistance to pay for health insurance as well as Home Visiting and Black Infant Health Programs. One new investment is money for Mental Health School Services to encourage collaboration between county mental health or behavioral health departments and K-12 schools.

Over 250,000 California public school students are homeless. The state budget provides more funding this year for Homelessness and Housing to support these families, including money to help low-income families pay for housing, food and other necessities.

According to research assembled by PPIC, these programs make a significant dent in reducing child poverty: 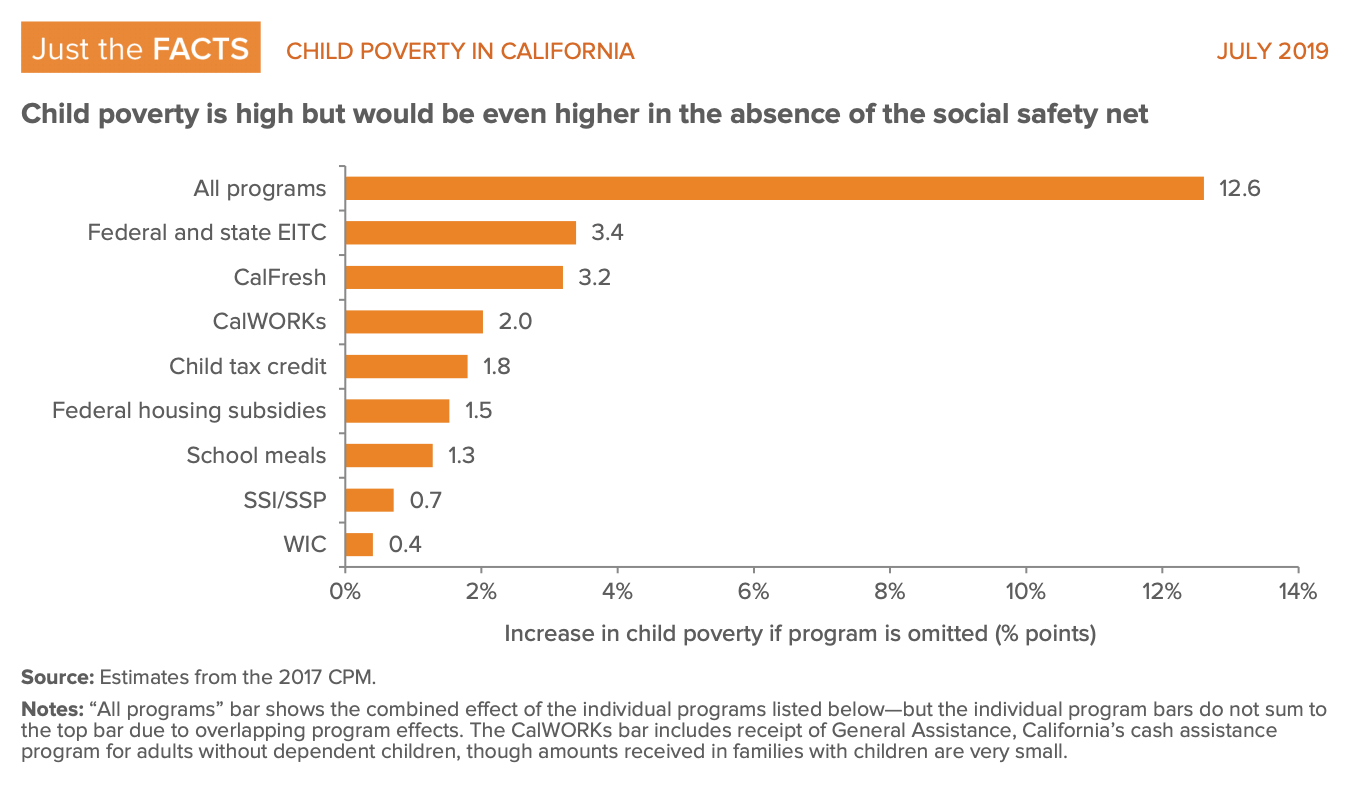 Next year promises lots of discussion about more funding for California schools. Education advocates are gearing up to increase school funding to the level of the nation’s top funded school systems. This is important, but we need to remember that funds in the education budget aren't the only funds that matter.

Measures that reduce the effects of poverty on children and families are vital, too.

Children need safe homes. They need to come to school healthy, rested, on time and ready to learn. They need parents and caregivers that can focus on them.

Yes, greater investment in schools is critical. But so are investments that level the playing field in even more basic ways.