View Lessons ▾ Blog Search
1.0 Education is…
Overview of Chapter 1 1.1 California Context
Are California’s Schools Really Behind? 1.2 International Context
Are U.S. Schools Behind the World? 1.3 Economic Context
Schools for Knowledge Work 1.4 Social Context
The High Social Costs of Educational Failure 1.5 Wishfulness
Sure, But My Kid Will Be Fine... Right?
1.6 Progress
Are Schools Improving? 1.7 History
Have Schools Always Worked This Way? 1.8 Purpose
What is Education For, Really?
2.0 Students...
Overview of Chapter 2 2.1 Diversity
The Changing Face of America's Students 2.2 Poverty and Race
How Do Students' Backgrounds Affect Their School Performance? 2.3 Health and Learning
What Can Schools Do? 2.4 Parents
A Child's First Teacher 2.5 Levers for Change
Inputs and Outcomes
2.6 Motivation
What Motivates Students? 2.7 Special Needs
Why Not Teach All Kids Alike? 2.8 Foster Youth
Educating Foster Kids 2.9 Undocumented
Undocumented Students 2.10 Student Voice
What is the Role of the Student in Education Leadership?
3.0 Teachers
Overview of Chapter 3 3.1 Recruitment
Who Teaches, and Why? 3.2 Preparation and Certification
How To Make a Teacher 3.3 Retention
How to Keep a Teacher 3.4 Placement
Who Teaches Where? 3.5 Development
How Do Teachers Improve?
3.6 Collaboration
How Do Teachers Work Together? 3.7 Benefits
The Benefits of Teaching 3.8 Pay
How Has Teacher Pay Changed? 3.9 Evaluation
How Do Teachers Know If They Are Succeeding? 3.10 Tenure and Seniority
Teacher Tenure - Good? Evil? 3.11 Pensions
How Good is a Teacher's Pension?
4.0 Spending Time...
Overview of Chapter 4 4.1 Early Childhood
Yes, Preschool Matters 4.2 Class Size
How Big Should Classes Be? 4.3 School Hours
Is There Enough Time To Learn? 4.4 Time Management
Spending School Time Well 4.5 Extra Time and Tutoring
When Kids Need More Time and Attention
4.6 Summer
Time to Learn, or Time to Forget? 4.7 After School
What Should Happen After School? 4.8 Absences
Don't Miss Class!
5.0 Places For Learning
Overview of Chapter 5 5.1 Where Do You Live?
Zip Codes and School Quality 5.2 School Choice
Should You Have a Choice of Schools? 5.3 Selectivity and Diversity
How Schools Sort Students 5.4 At Risk
When Regular School Doesn't Cut It 5.5 Charter Schools
Public schools, different rules
5.6 Private Schools
Tuition, Vouchers and Religion 5.7 Community Schools
Could Schools Do More Than Educate? 5.8 Principals
The Pivotal Role of Educational Leadership 5.9 Facilities
What Does a School Look Like? 5.10 School Climate
What Makes a School Good? 5.11 Small Schools
Oops, We Shrunk the Schools!
5.12 Home Schools
How Do They Work? 5.13 Discipline and Safety
Who Rules the School?
6.0 The Right Stuff
Overview of Chapter 6 6.1 Great Expectations
How Do Common Core Standards Work? 6.2 Academic Rigor
Is School Challenging Enough? 6.3 Literacy
Ensuring All Kids Learn to Read, Write and Speak English 6.4 STEM
Science, Technology, Engineering and Math 6.5 Test Question #1
What's at Stake?
6.6 Technology in Education
New Tools for Teaching and Learning 6.7 Let’s Get Engaged
Making School Interesting 6.8 The Arts
Creating in School 6.9 P.E. and Athletics
Are They Really Necessary? 6.10 Let’s Go!
What Makes a Field Trip Great? 6.11 Career Technical Education
New Thinking
6.12 Service Learning
How Can I Help? 6.13 Social-Emotional Learning
Intangibles that Support Academics 6.14 Character
Can Values and Habits be Taught? 6.15 Geography, History and Civics
When, Where and Why 6.16 Language Learning
How Not to Raise Ugly Americans 6.17 Personal Finance
Learning to Earn
7.0 And a System…
Overview of Chapter 7 7.1 The State
The Buck Stops Here 7.2 The Feds
Power to Provoke Change in Education 7.3 School Districts
In Charge of Most Local Schools 7.4 Thinking Regionally about Education
County Offices, and Crossing Boundaries 7.5 Teachers' Unions
Don't Underestimate Them
7.6 Initiatives and Education
Power to the People? 7.7 Education Power Players
Politics and Philanthropy 7.8 Accountability
Principles and Policies for Education 7.9 Consequences
Intervening When Schools Fail 7.10 The LCAP
Annual plans for school districts
8.0 …with Resources…
Overview of Chapter 8 8.1 Spending
Does California Spend Enough on Education? 8.2 Education Dollars
What They Buy 8.3 Who Pays
Where California's Public School Funds Come From 8.4 Prop 13 and Prop 98
Then and Now 8.5 Local Control Funding Formula
LCFF Dictates How State Funds Flow to School Districts
8.6 Allocations
Categoricals and Other Exceptions to the Rules 8.7 Allocations
Districts Control How Money Gets to the Classroom 8.8 Effectiveness
Is Education Money Well Spent? 8.9 More Money for Education
What Are the Options? 8.10 Parcel Taxes
Only in California... 8.11 Volunteers
Stealth Wealth for Schools
9.0 Success
Overview of Chapter 9 9.1 Measures of Success
For Kids and For Schools 9.2 Student Success
How Well is My Kid Doing? 9.3 Tests
Standardized Measures of Student Learning 9.4 Student Readiness
College and Career 9.5 Education Data
Keeping Track of the System
9.6 Achievement Gaps
The System's Biggest Challenge 9.7 The Dashboard
Measuring California School Performance 9.8 After High School
What California’s System Provides 9.9 Paying for College
High Hopes and College Loans
10.0 So Now What?
Overview of Chapter 10 10.1 Blow It Up?
Big Ideas For Education Change 10.2 Go Big
What Money Might Do 10.3 Go Lean
Education for Less 10.4 Change
What Causes Change in Education? 10.5 Learn More
Organizations and Resources

How California Budgets for Education 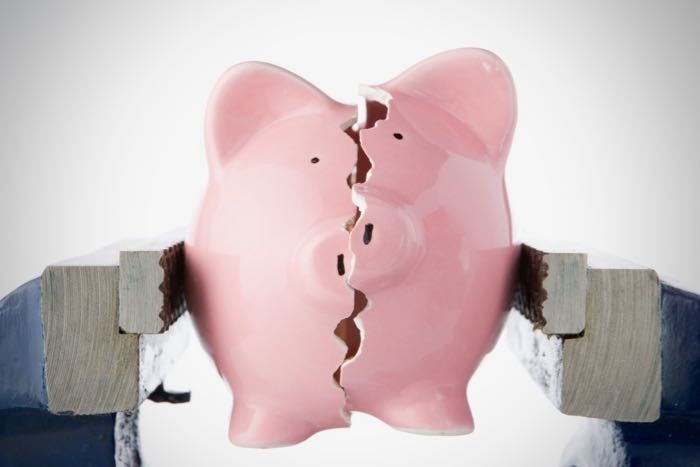 We Squeezed the California Education Budget Process into One Short Blog Post!

Every year, California creates a budget for public education. How does that work, actually? Who creates and influences it, and when are the decisions made? How can you get involved and have an influence?

...and how does the pandemic change things?

Let’s start with the basics: How much $$ does education get in the state budget?

In January, the governor of California proposes a budget for the state based on a forecast of the taxes the state will take in, and how the law directs that the funds should be used. In January of 2020 the outlook was pretty sunny, and the forecasts called for substantial growth.

As it became clear that the effect of the pandemic on tax receipts would be swift and severe, the state's budget forecasters were left to scratch their heads. California's constitution requires that the budget be balanced. Education’s minimum share of the money is determined by a formula known as Prop 98. The formula includes many factors, including how well the economy is doing, whether there are more or fewer kids in public school, and changes in the cost of living. Some say there are only about three people in the whole state who really understand how the formula works, but in the end the education budget ends up about 40% of the general fund.

The state rarely allocates any more to education than the minimum required by law. Good budget years are good for public education — and the reverse is also true. (For more see Ed100 Lesson 8.3). 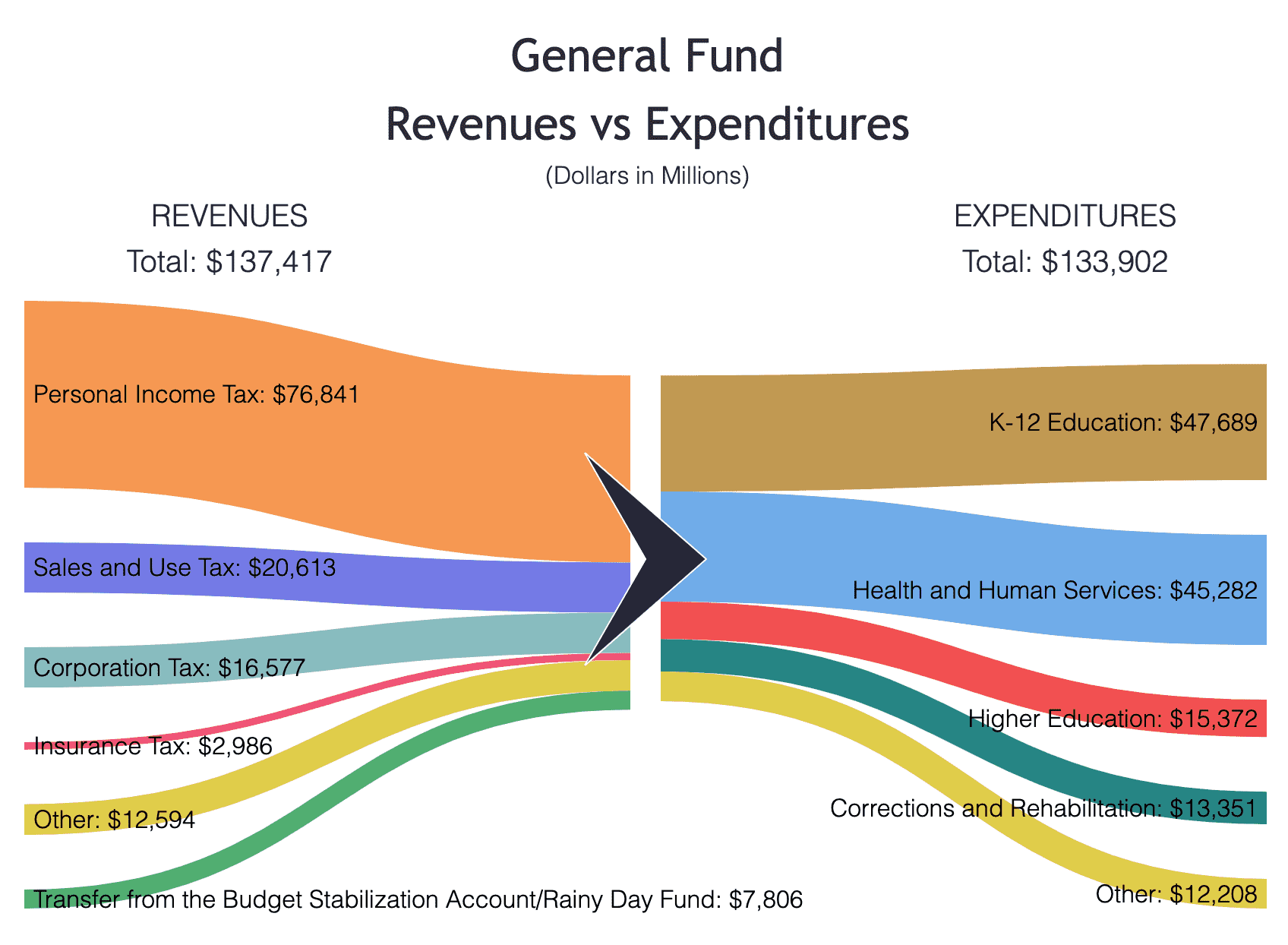 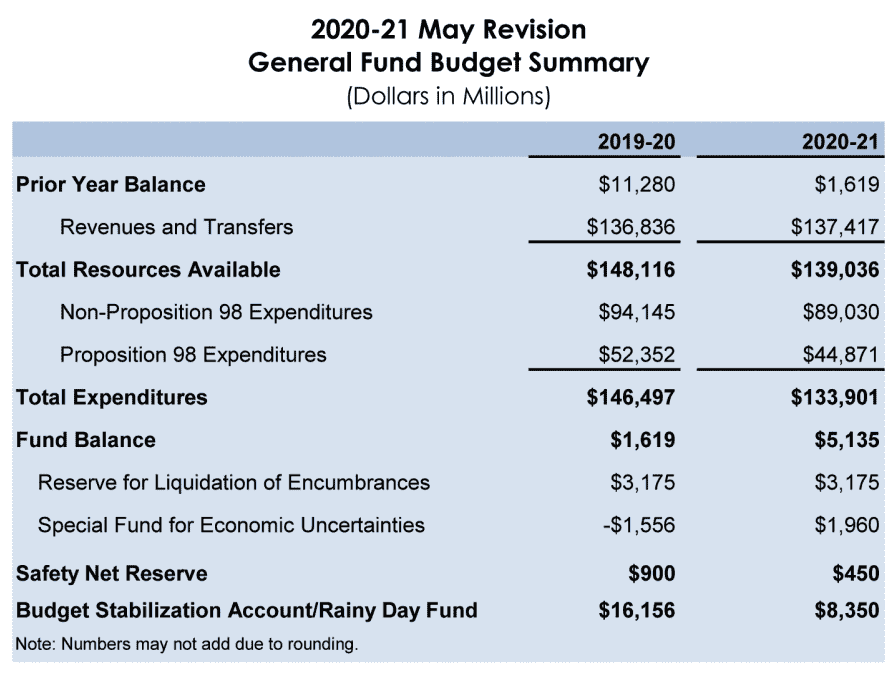 How is the education share of the budget divided?

Most of the money for K-12 education goes directly to school districts based on the number and characteristics of students who show up to school. Those rules — collectively known as the Local Control Funding Formula (LCFF) — define how the pie is divvied up. Unless the pie grows larger, increasing the LCFF portion means taking money from the other small portion of that pie. It’s really a zero-sum thing. 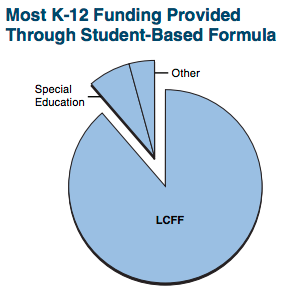 Here is the big picture: There are hearings throughout the first half of the year that look at both the budget itself and at the budget impact of education bills. Each of these pathways is a little different. (The nonprofit California Budget & Policy Center does a great job of explaining the distinction between these two paths.)

By January 10, the Governor officially kicks off the budget process by proposing a budget with support from the state Department of Finance. Budget committees in the Senate and Assembly consider the Governor's proposed budget as a whole. Subcommittees in the Senate and Assembly separately examine the proposed budget for education. These hearings are open to the public. When agendas are set, you can find them online.

After the Governor releases the proposed budget, advocates react, shoring up support for the parts they favor and scrambling to make adjustments.

By May 14, the Governor releases a revised budget that reflects input and more up-to-date financial information. (You guessed it, it's called the May Revise). In normal times, this revision is based on early data about income tax receipts. In 2020, the federal tax deadline was delayed to June, so there will be less data to go on. The Governor's revision reflects a guess about what will happen in the economy and in tax receipts. Separately, the Budget Committees of the Senate and Assembly also each adopt their version of the budget. A conference committee irons out differences between these versions.

By June 15, the Senate and Assembly leaders huddle with the Governor to hash out the final details and pass a balanced budget by a majority vote of both houses. If the process gets stuck and they don't pass a budget on time, legislators are not paid, based on an initiative passed in 2010 after a series of budget delays.

On July 1, the state begins the new fiscal year. Between the passage of the budget by the legislature and July 1 the Governor may cut specific expenditures using line-item vetos. This is rare.

At the same time as the main budget bills are in the works, the Senate Education and Assembly Education committees consider policy bills that affect education. Some policy bills approved by these committees involve money. If a bill requires significant money, it must survive passage through the Senate Appropriations or the Assembly Appropriations Committee. Many bills die in these committees because the cost is too high.

Want more? The California Budget & Policy Center has an excellent report on how the policy process and the budget process work together.

While the budget bill is adopted by July 1, education policy bills continue the legislative process through the summer. Similar to the federal process, after a bill passes one house, it must then go to the other for consideration. (The adopted budget may be revised a bit, with the Governor's approval, to include funding in these adopted bills.)

Legislation is often a multi year process. If a bill fails at first, it may have set the stage for further discussion of the issue the next year.

How You Can Get Involved

That’s why you are reading this, right? You want to know how you can get informed and have some say in the budget process.

Get Informed. Throughout the development of the budget, the Legislative Analyst's Office provides detailed information and analysis. You can sign up to be notified whenever there is a new report. Separately, the California Department of Finance offers information on the current Governor's budget, as well as budget information from past years.

As bills work their way through the legislative process, you can find information about them on the state's "Leg Info" page (it's pronounced "ledge info").

The LegInfo service is a vital tool for finding and tracking bills in process.

Hear Carol's radio interview about how to be heard.

Meet with your legislator. Legislators welcome contact with their constituents; why not set up a meeting with the office of your legislator to discuss an issue you care about? Frequently, you will be directed to the staff person who is responsible for education issues.