California’s middle schools and high schools have a big job. Along with all the academic stuff, these schools have to ensure that each pimpled adolescent learns about sex. Hopefully in time.

Sex is not a four-letter word

Most of us aren't exactly practiced teachers when it comes to talking with kids about sex. We know we should speak frankly, but words like "vagina" make us blush, and how credible are we when blushing? Anyway, maybe we don't quite have our facts straight, right? We haven't really practiced how to explain it, and...

Come to think of it -- we're kind of busy at this very moment. Can't we talk about this later?

Each year in the state of California, approximately a quarter of a million girls have their first period, usually within a year of age 12 and a half. Most schools begin teaching "puberty ed" in seventh or sixth grade, usually with a particular eye toward the girls.

For most boys at this age, puberty is an unconfirmed rumor beginning to shadow their upper lip. In seventh grade, the tallest student in the room is often a girl. Puberty hits boys later and differently, and that's why most schools follow up "puberty education" in middle school with "sex ed" (or "sexual health education") in high school.

The average age of first sexual intercourse for girls in America is 17.3 years of age, younger than the minimum age of consent in California.

According to survey data collected by the Centers for Disease Control, a quarter of girls in America have sex for the first time before they turn 16. If that doesn't chill you, this will: Surveys by the NCHS show that the first experience of intercourse for 6.2% of girls is “not voluntary.” Planned Parenthood estimates that every day in America about 2,000 teen girls become pregnant.

There is significant good news. Teen pregnancy rates, birth rates, and abortion rates have all declined dramatically over the long term. Still, about one in twenty American girls gets pregnant before her 20th birthday. 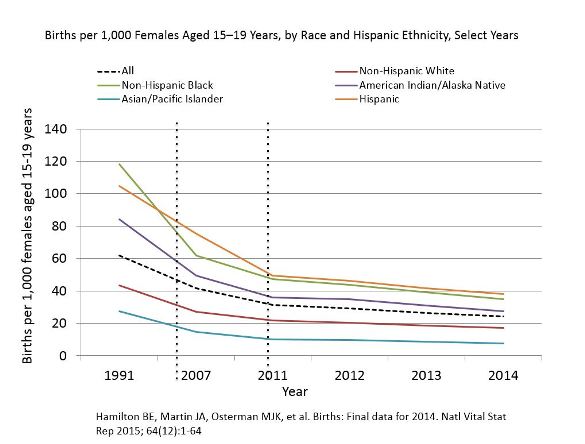 Most people agree that schools need to teach sex ed. But they don't necessarily agree about what sex education should include, what the goals of sex ed programs should be, and whether specific programs can achieve those goals.

What California Teaches About Sex

In 2015 the California legislature updated its policies for sex education and HIV/STD prevention. In doing so it significantly clarified what schools are obligated to teach. The California Healthy Youth Act requires public schools to provide all students in grades 7-12 with age-appropriate sexual health education that is "comprehensive and medically accurate."

The official goals of the act are expressed in carefully negotiated legalese. Here's a loose translation:

California's minimum legally required "dosage" of sex ed is just one class session in junior high school and another in high school. It is unclear whether this minimum has any effect; most programs that have been evaluated engage students more meaningfully and frequently.

According to preliminary research by the ACLU of Northern California, there's quite a variation in who teaches this subject. In many schools the job goes to a science teacher or a PE teacher. Other schools hire consultants -- and some are a lot are better than others. Comedian John Oliver lampoons some of the more ridiculous examples here, and offers his own not-entirely-satirical alternative.

Lessons on these squirm-inducing topics make for an interesting and memorable break from the usual curriculum. But do they make a difference? It's fair to ask, right? Can occasional instruction in school compete with hormones and pop culture?

Perhaps amazingly, the answer appears to be yes -- at least a little.

More teens are having safer sex, and sex education could be a part of the reason.

If education can influence sexual choices about prevention, can it also change attitudes about consent? California is giving it a try. As part of its requirements for sex ed, California high schools also must teach students about "affirmative consent," better known as "yes means yes." It is too soon to know much about whether this new standard is having an effect.

Where to Learn More

For many years, San Francisco Unified School District has addressed sex education with more frankness and seriousness than most school districts as part of its overall health curriculum, which also incorporates drug use and other topics. The district has made a huge amount of its curricular materials public.

Of course, when it comes to educating parents and teens about sexual health, no organization has been at it longer than Planned Parenthood.

Is your school district changing its approach to sexual health education? What's working? We'd like to hear about it! Just send us a note at jeffcamp@ed100.org.

Great piece about sex education in the Atlantic at the opening of 2020.

Are girls getting their periods earlier than they used to? Yes. GreatSchools explains the findings: http://www.greatschools.org/gk/articles/puberty-normal-development/?utm_source=Ed100