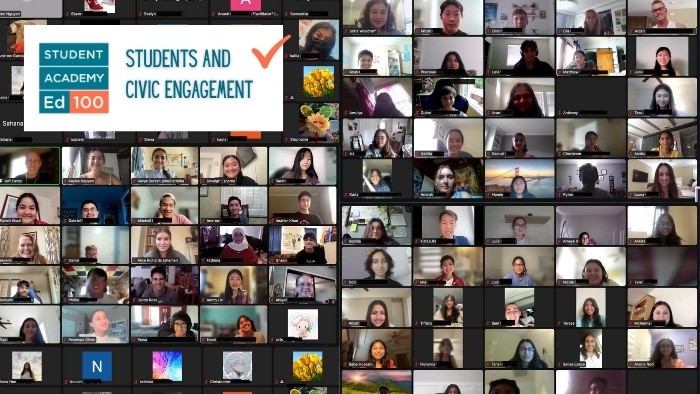 About 300 students participated in all or part of the 2022 summer conference of the Ed100 Academy for Student Leaders, June 20-22. Over the course of this free, three-day online event, students learned from 43 speakers, including elected officials, researchers, non-profit leaders, journalists, innovators, educators, and, of course, students. They also met one another in breakout sessions, took notes, and identified actionable next steps, some of them with the 12 organizations that aligned with the program as Engagement Partners.

Coordinated student effort made the conference possible. The event host was Alvin Lee, a rising sophomore at Stanford who is also a founder of GENup, a student organization. Students recruited, recorded and edited speakers. Students developed learning materials and interactive conference sessions. Students developed and edited video content. Students ran the event and facilitated breakout sessions. Student outreach ambassadors got the word out to school communities and media organizations.

This was the third iteration of the conference, which originally launched in the pandemic summer of 2020. We have been combing through the extensive survey feedback. What were the outcomes? What are the possible next steps? This post is a brief summary of a more complete Post-Event Analysis.

The vast majority of participants in this conference were high school students. More than half of the students were rising seniors (28.6% ) or rising juniors (28.2%). About a fifth were rising sophomores, and about a tenth were rising freshmen or eighth graders.

Who spoke, and how were they received?

The speakers for each day are listed in the program guide.

At the end of each day of the conference, we administered a survey that (among other things) asked students to select up to four sessions that were most USEFUL to them. This produced a forced ranking. The big takeaway from these surveys? There was a lot of variation. Different speakers were useful to different students.

On Monday, 151 out of the 199 respondents listed Sal Khan among the four most useful out of the ten sessions. The session mentioned least frequently was the brief recording of Hudson Yang — but that doesn’t mean the session was a dud. At only a minute in length, this session was one of the top picks for 11% of the respondents, who might have been inspired by his message about getting civically engaged.

Few of the students at this conference attended charter schools, so it would be natural to expect that a presentation about them would be of limited relevance. Nevertheless, Hae-Sin Thomas, who spoke about charter schools, was cited by 30% of respondents as having delivered one of the four most useful presentations of the day.

In addition to this summative assessment, students responded to the open-ended question “What are the three most important things you learned from today's sessions?” For their answers, view the full Post-Event Analysis.

On Tuesday, 127 out of the 193 respondents named Dr. Shirley Weber’s presentation among the four most useful of the nine they saw. Dr. Weber explained how students aged 16 and up could participate in elections and campaigns — and get paid for it.

Carrie Hahnel’s presentation, titled “The Change-Maker’s Toolkit,”, was the longest session of the conference, 45 minutes of practical information about how to access and use education information resources in ways that even many school board members don’t know about. She taught students how to find school board policies using GAMUT Online, for example, and how to compare district finances using Ed-Data.org. No one expects parents to know this stuff exists, much less students!

Again, students were asked “What are the three most important things you learned from today's sessions?” For their answers, view the Post-Event Analysis.

On the third day of the conference, students heard short “pitches” from a dozen organizations that have leadership opportunities for students. Students were invited to rank their interest in these organizations and opt-in to connect with any that they found exciting. This match-making exercise yielded the following results: 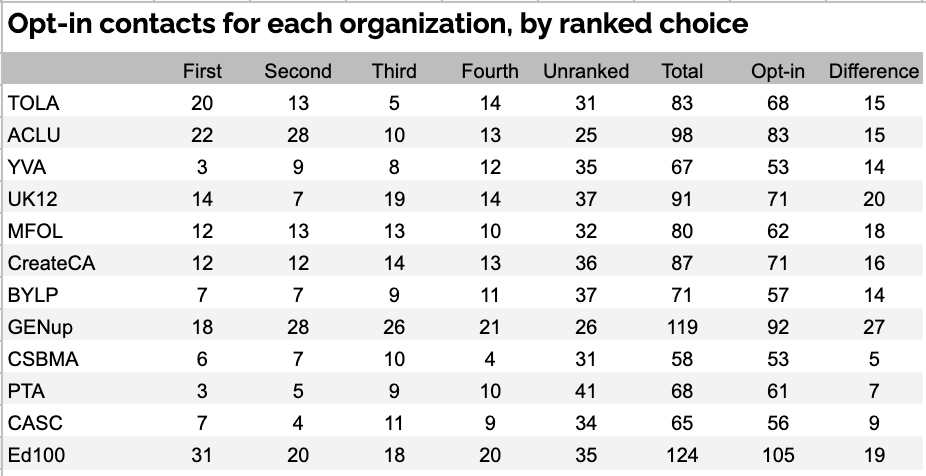 Every organization came away with contact information for at least three highly motivated students, and some with many more. Read more in the Post-Event Analysis.

As in past years, students said they came into this conference with very uneven understanding of the education system.

They overwhelmingly left the conference with the sense that they understood it better.

You can read much more information about the conference survey findings in the Post-Event Analysis.