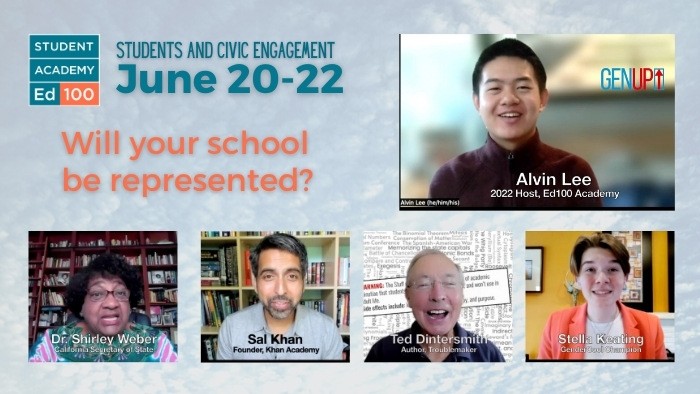 It will be a great conference.

Students and advisors who participate in this summer’s conference of the Ed100 Academy for Student Leaders will learn from about 30 amazing people. We thought it would be fun for you to learn about a few of them and hear why they are excited to be part of this free event. See the full program guide.

Have students applied from your high schools? Don’t assume — check our list!

You'll get to know Alvin Lee as the host of the Academy. He is the student founder of GENup, a fast-growing coalition of student advocacy organizations that elevates and amplifies the voices of students in both high schools and colleges, throughout California and beyond.

Josh Fryday is the Chief Service Officer for the State of California, reporting to the Governor. He leads service, volunteer and civic engagement efforts throughout the state. Fryday is a military veteran and the former Mayor of Novato, his home town. Prior to stepping up as CSO for the state of California, he served as the president of Golden State Opportunity (GSO), led NextGen Climate, and served as an officer in the US Navy as a member of the Judge Advocate Corps (JAG).

As Secretary of State, Dr. Weber is California's chief elections officer. She is a fascinating person with a long career in state leadership. Watch this brief clip for a preview of what she'll be talking about at the Academy.

As a young advocate for transgender rights, Stella has spoken directly with some of the nation's most powerful people about what it takes to open hearts.

This will be Dintersmith's third appearance at the Ed100 Academy conference — you can think of him as part of the original cast. In surveys, students consistently rate his session inspiring and thought-provoking. He doesn't look at the education system in the same way most people do. You'll get a taste of his style in this preview:

Ellie is the new president of the California Association of Student Councils, one of the state's oldest and most-established organizations for student leaders. She's a rising senior at Portola High in Orange County. 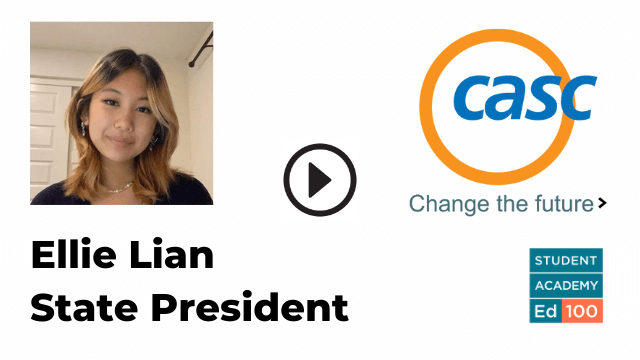 Naomi will be the student member of the California State Board of Education beginning in the fall. It's the highest position in government that a student can serve, a full voting position, appointed by the Governor to represent more than six million students.

That's just a taste of what's in store for the students and adult allies who attend. For more, see the full program guide. See you there!