Trump vs Biden on Education Issues

Background: The Federal Role in Education

The role of the federal government in public education has evolved over time.

The United States Constitution makes no mention of education. Public education in America began as a local matter and gradually became a responsibility of state governments. Federal funding for K-12 public education generally has accounted for less than 10 percent of overall funding, playing a greater role in schools where needs are greatest.

Political philosophies can have an impact on how funds are used. Historically, federal funds for education were intended to support states with basic funding, but some federal programs have been designed to create incentives for states and districts to adopt specific policies. For example, federal incentives implemented under the No Child Left Behind Act played an important role in the widespread measurement of success in schools and school systems using test scores and measurement of attendance.

In his inaugural address, President Trump said that America's public schools are “flush with cash." In every year of his administration he has proposed cuts to funding for public education. See details for each year: 2018, 2019, 2020, 2021. For the past three years, Congress has disregarded these proposals. 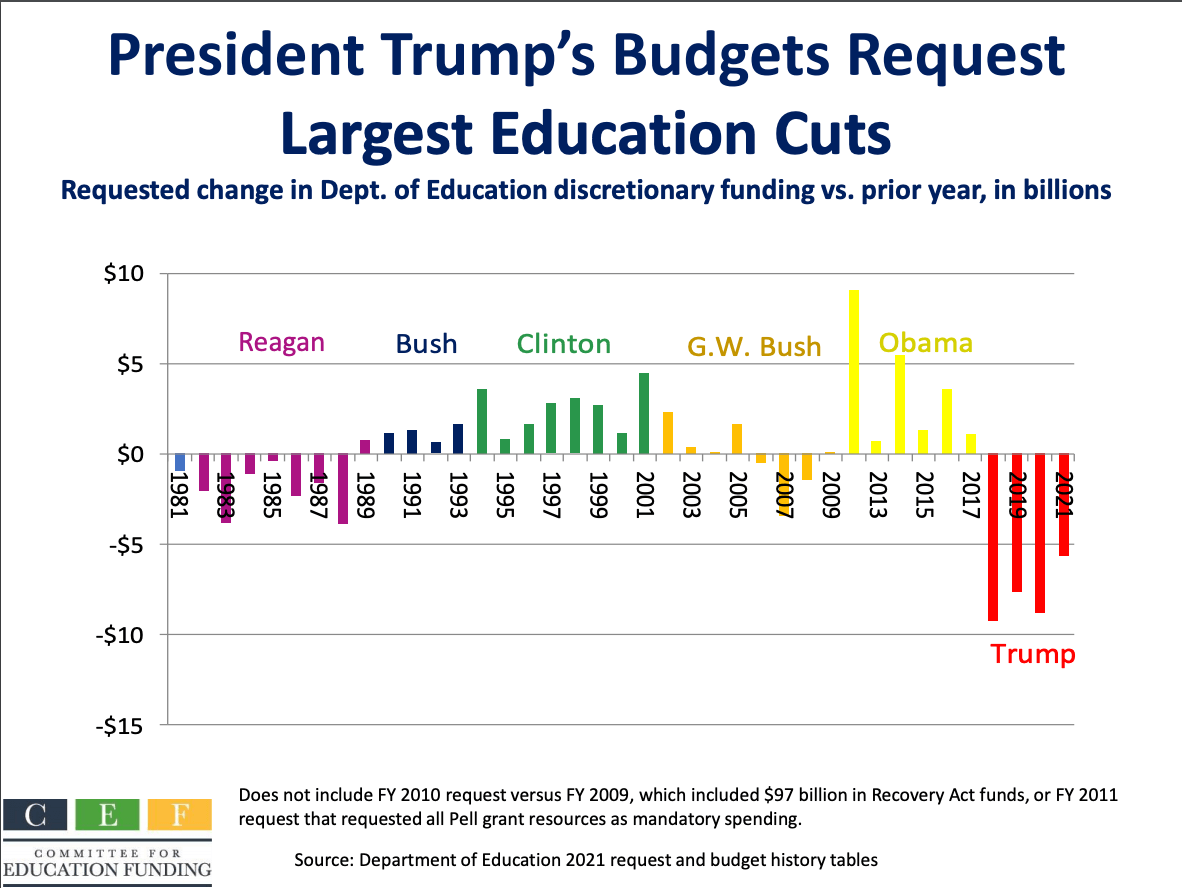 This year the Trump administration proposes to eliminate 29 federal education programs by rolling them into a block grant that would dramatically reduce or eliminate federal involvement and oversight. According to a press release from the Department of Education:

“Our budget puts an end to education earmarks. Instead of Washington politicians and bureaucrats forcing local schools to spend limited resources on D.C.'s priorities, this budget proposes putting state and local leaders, teachers, parents, and students themselves in control of education.”

The Trump administration has consistently opposed proposals for meaningful additional Federal funding to meet the needs of traditional public schools in the face of the pandemic.

The federal government has special responsibilities for schools in Washington, D.C. As part of the D.C. Opportunity Scholarship program, the Department of Education will award at least $85 million over the next five years for disadvantaged students from families with lower incomes in Washington, D.C. to attend private schools of their choice. The D.C. Opportunity Scholarship Program is the only federally-funded school choice program in the nation.

A recent legal battle over efforts to give COVID-19 aid to private schools is an example of the President’s push to direct public money toward private schools. The court ruled invalid (NAACP v DeVos) a U.S. Department of Education regulation requiring public schools to send hundreds of millions of dollars in federal COVID-19 relief funds to private schools. You can find out more about the case here.

The Trump administration has lost other legal battles on education issues: blocking pandemic relief for non-citizen college students and failing to discharge student loan debt for defrauded students. Another legal challenge is brewing: The Education Department has threatened to withhold federal desegregation grants from states unless they ban transgender students from choosing the teams they compete on.

Education accounts for less than 2 percent of the federal budget. Vice-President Biden proposes to raise education funding in ways that would increase the federal education budget over the next ten years by about $850 billion. These include: